Flying up the Jungfrau

We took off at the top of Schilthorn, a few steps from the James Bond lair, astride a jagged rocky ridge. There is a torn mat on tangly rocks that is meant to help get away before the cliffs, but it’s still a snaggly nightmare, and I spent a while untangling knots and aborting before I was able to take off. The adrenaline was flowing a bit. I had also packed far too few layers - it was an oven down in the valley, but of course up here, thousands of meters higher, it was cool, and our goal was to fly even higher to the snow line. I was saved with a loaned base-layer from Oleg.

The cloud above the Schilthorn signalled reliable lift and I thermalled below it trying to gain as many meters as possible before the long crossing to the flanks of the Jungfrau. My radio crackled with the news that one of my friends had snagged a line taking off and it had broken, so he was flying delicately to the valley to repair it. The others were already far ahead. I thermalled up the side of the cloud trying to scrape a few extra meters and then set off, aiming for a steep snowfield below a couloir that apparently caught some thermals in the light westerly wind. I lay back as streamlined as possible and pushed half bar. 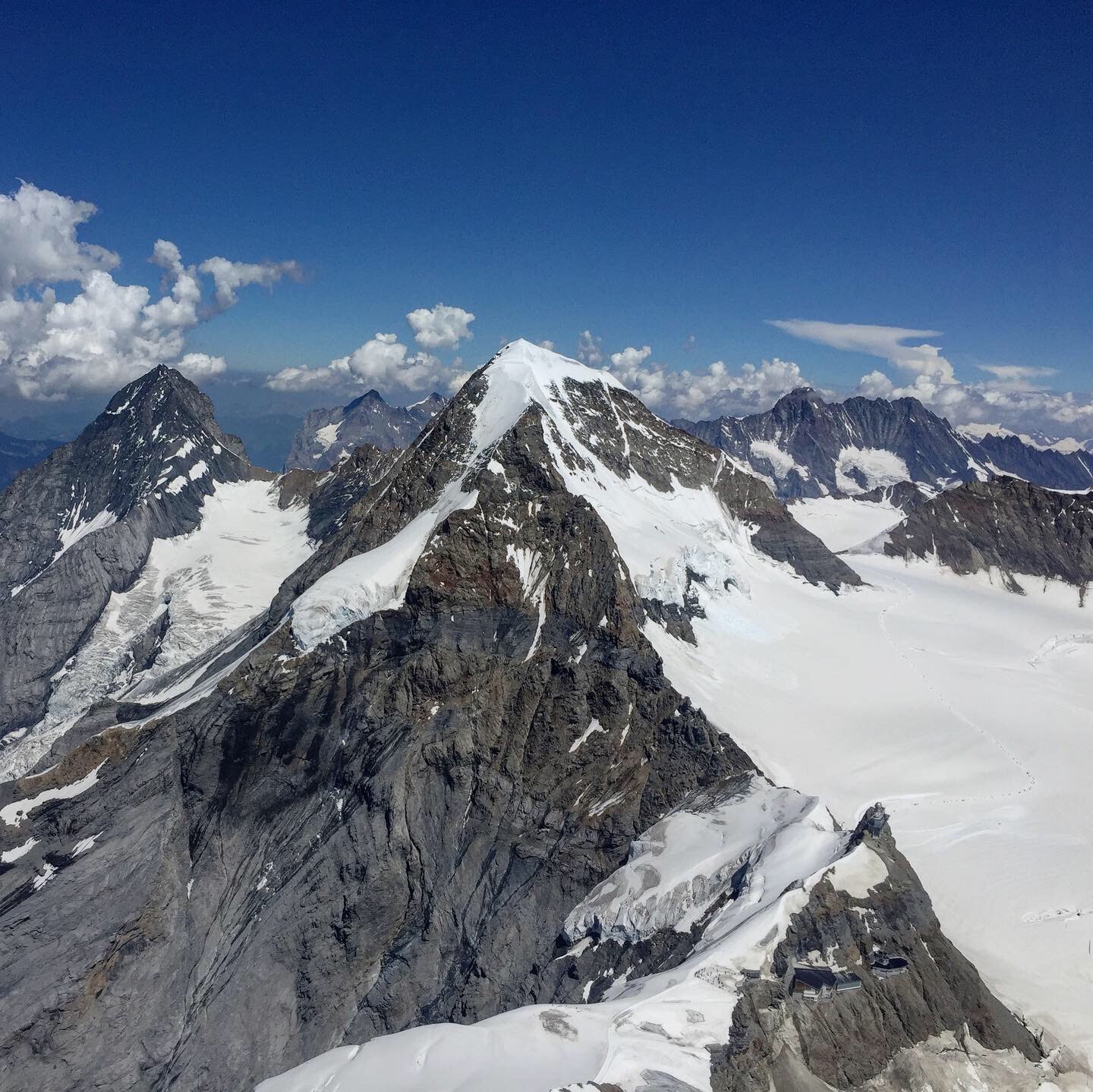 By the time I arrived, another wing had slowly made a few hundred meters on the rocky ridge, and I thermalled below him, before catching up and climbing higher. There was a strong patch of lift on the lip of a cruel rocky ridge, so I scraped up that. The other wing played a different game, heading south to another lip where he shot up like a rocket. I crossed to try the same, but the lift was light, a small bubble must have passed.

After an hour or so, I was playing with the clouds at cloud-base, perhaps a hundred meters lower than the summit. It was freezing here, and my hands were already numb, and even with flexing exercises, I was beginning to shiver. I managed to get within about 50 meters of the summit, before turning and gliding low over the summit snow-cap east around the peak. Only a few meters below me, crampon tracks traversed around the crevasses towards the summit. 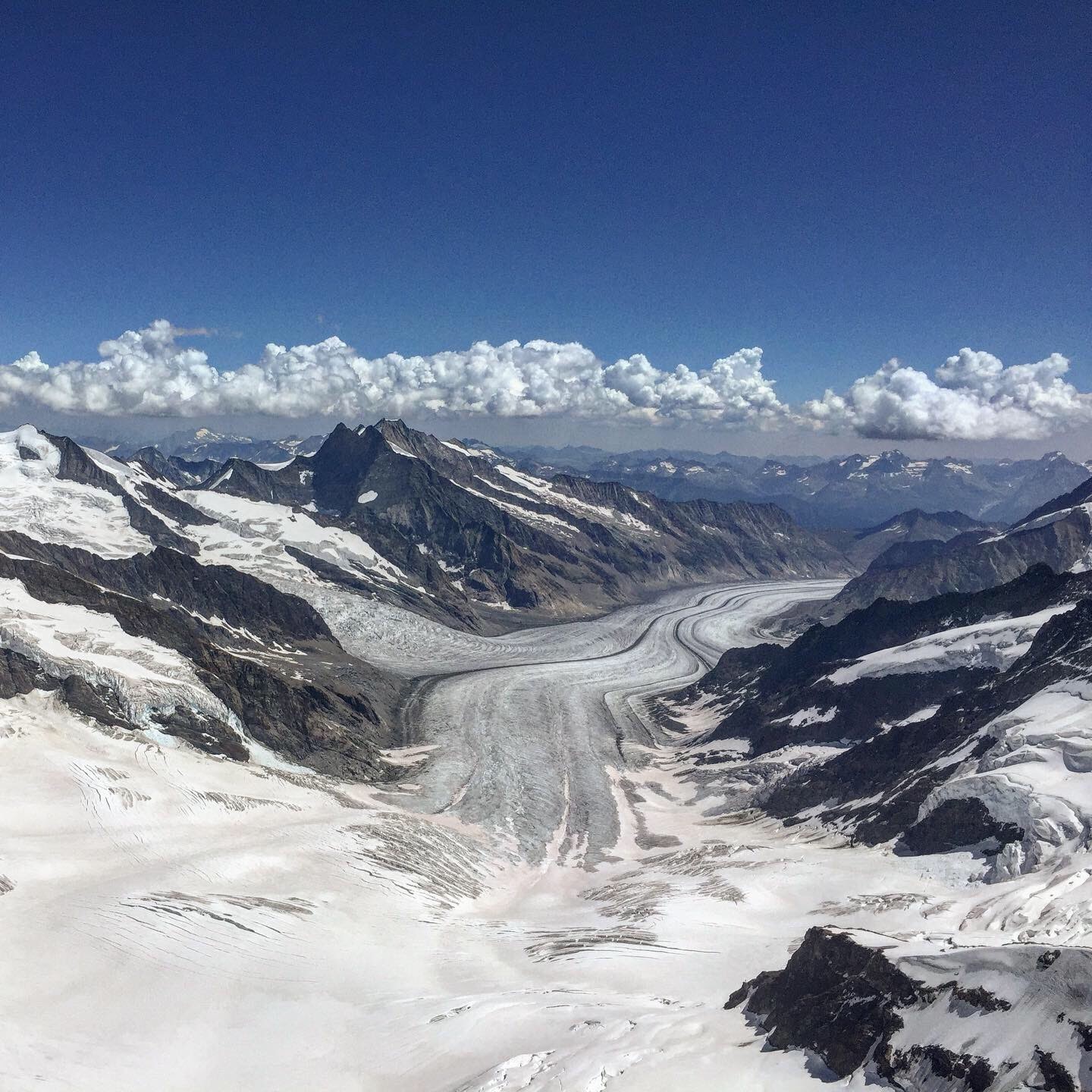 As I left the peak, the view of the Aletschgletscher opened up to the south, a giant sea of gravel streaked ice striped with moraines. I managed to squeeze off a picture with numb hands, before heading towards the Mönch and then the Eiger.

There was a tiny bit of lift that I attempted to circle in, but there was a lot of turbulence, so I decided to switch course and go on glide towards the Faulhorn. Our original plan was to head as far west as possible, and from the radio it sounded as though some friends were struggling with the Meiringen crossing ahead.

Between Faulhorn and First there was a good thermal cloud and I managed to get back to base before heading towards Schwarzhorn.

But at this point the day turned, some high cloud bank must have killed the activity, and I scratched to stay up. Eventually I abandoned my plans of heading west and headed back towards Faulhorn where there was still patchy lift. 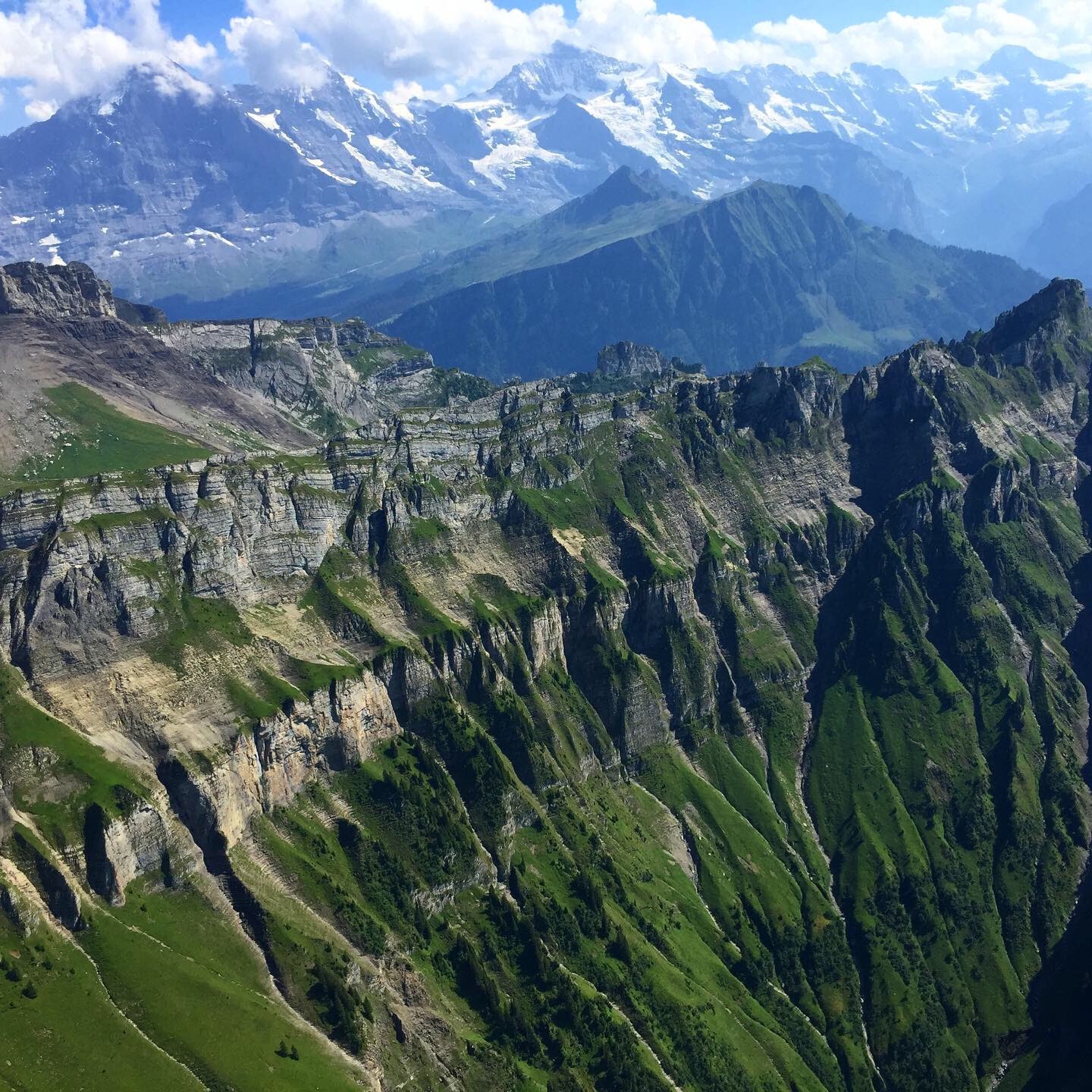 I was getting pretty tired, so, after a few searches for new lift, decided to head towards Interlaken on glide from the Faulhorn.

It was a spectacular trip back, past the wall of cliffs above Brienzersee.

I arrived high, and even flirted with the idea of following the ridge North of Interlaken Eastwards, but I was tired, it had been a great flight, and the day was dying. Instead I landed in Interlaken in the 35 degree oven.